Tom and Jerry is a series of theatrical animated cartoon films created by William Hanna and Joseph Barbera for Metro-Goldwyn-Mayer, centering on a rivalry between a cat (Tom) and a mouse (Jerry) whose chases include slapstick comedy. Hanna and Barbera ultimately wrote, produced and directed 114 Tom and Jerry shorts at MGM cartoon studios in Hollywood from 1940 to 1957. The original series is notable for having won seven Academy Awards, tying with Walt Disney's Silly Symphonies as the theatrical animated series with the most Oscars. A longtime television staple, Tom and Jerry has a worldwide audience and has been recognized as one of the most famous and longest-lived rivalries in American cinema.

MGM released an additional 13 entries in 1961 produced by Rembrandt Films led by Gene Deitch in central Europe. Chuck Jones's Sib-Tower 12 Productions produced another 34 entries between 1963–1967, creating a total of 161 theatrical entries. Tom and Jerry resurfaced in made-for-television series' produced by Hanna-Barbera Productions and Filmation Studios starting in the 1970s. The feature-length film, Tom and Jerry: The Movie was released in 1992, and was followed by their first made-for-television short, Tom and Jerry: The Mansion Cat for Boomerang. The most recent Tom and Jerry theatrical short, The Karate Guard (2005), was written and co-directed by Barbera. Time Warner (via its Turner Entertainment division) currently owns the rights to Tom and Jerry: Warner Bros. handles distribution. Since the merger, Turner has produced Tom and Jerry Tales for The CW's Saturday morning "The CW4Kids" lineup, and several Tom and Jerry direct-to-video films in collaboration with Warner Bros. Animation.

The series features comedic fights between an iconic set of enemies, a house cat and mouse. The plots of each short usually center on Tom's numerous attempts to capture Jerry and the mayhem and destruction that ensues. Tom rarely succeeds in catching Jerry, mainly because of Jerry's cleverness, cunning abilities, and luck. Despite this, there are also several instances within the cartoons where they display genuine friendship and concern for each other's well-being. Other times, the pair set aside their rivalry in order to pursue a common goal, such as when a baby escaped the watch of a negligent teen babysitter, causing Tom and Jerry to pursue the baby and keep it away from danger.

The cartoons are infamous for some of the most violent cartoon gags ever devised in theatrical animation, with Tom using everything from axes, hammers, firearms, explosives, traps and poison to try to murder Jerry. On the other hand, Jerry's methods of retaliation are far more violent due to their frequent success, including slicing Tom in half, shutting his head in a window or a door, stuffing Tom's tail in a waffle iron or a mangle, kicking him into a refrigerator, plugging his tail into an electric socket, pounding him with a mace, club or mallet, causing a tree or an electric pole to drive him into the ground, sticking matches into his feet and lighting them, tying him to a firework and setting it off and so on. Because of this, Tom and Jerry has often been criticized as excessively violent. Despite the frequent violence, there is no blood or gore in any scene. 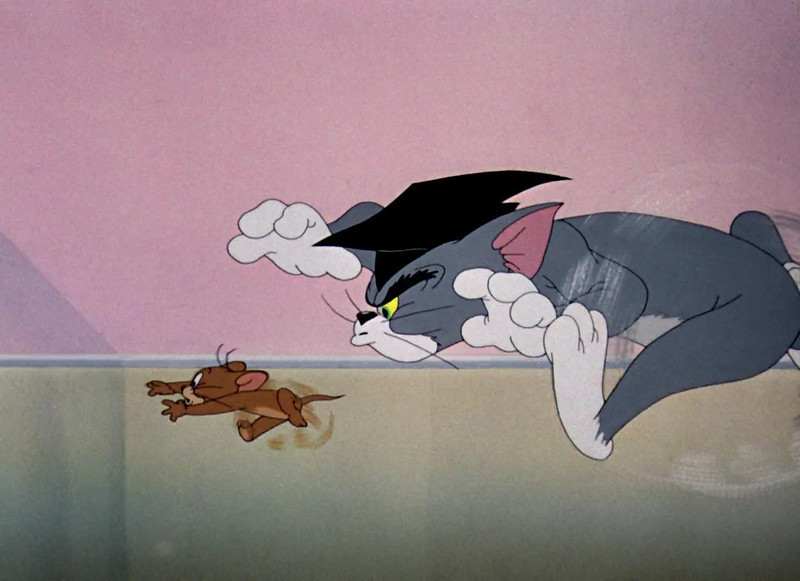